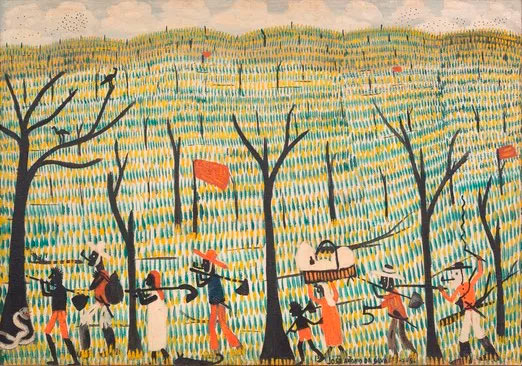 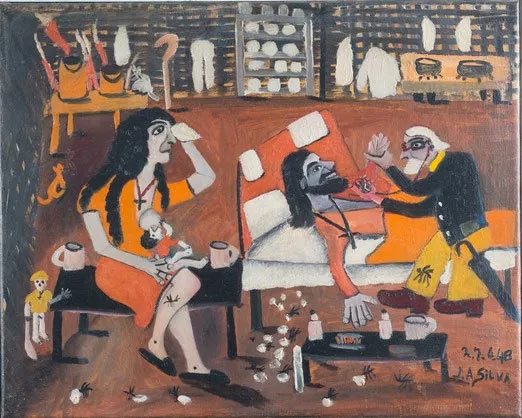 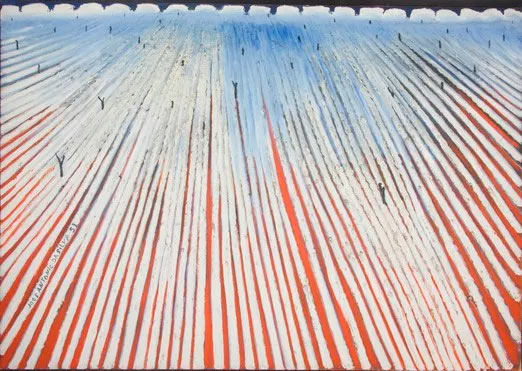 The exhibition José Antonio da Silva – A vida não basta (Life is not enough), with curatorship by Denise Mattar, brought together 50 works spanning four decades of art output from the late 1940s through to the mid-1980s. The selection charts the growth and diversity of the oeuvre of the artist who produced over 5,000 works in his lifetime, making him the most prolific artists in Brazilian history.

Born in a poor family, inSão Paulo´s hinterland, Silva began drawing as a boy using raw materials sourced from the countryside, such as leaves and fragments of sand and coffee sacks.

His discovery as an artist came to pass in 1946 when taking part in a contest promoted by the House of Culture in his hometown São José do Rio Preto, when Silva caught the eye of art critics Lourival Gomes Machado and Paulo Mendes de Almeida, who saw in his work a genuine expression of Brazilian rural culture. In 1948, the artist had his first solo exhibition at the newly inaugurated Domus Gallery, and took part in the I International Art Biennial of São Paulo in 1951.

The works showed at the exhibition went trough diferente moments of Silva’a painting. The saturnine nature of the rural landscapes of works such as the Caçador e Casebre (Hunter and Shack) and Paisagem rural e trabalhadores com enxadas (Rural Landscape and laborers with hoes) both from 1948, and domestic scenes – O médico da roça (The countryside physician)(1948) and Flagrante de adultério (Flagrant Adultery)(1950) – which in their way revealed the hardship of a father of six children struggling to survive, was slowly diluted over the ensuing decades, giving way to new techniques and a more joyous and diverse palette of colors. Fields planted with banana trees (1956) and the Cotton Fields series of the 1970s illustrate the artist´s new palette and technical evolution, after coming into contact with works by artists such as Van Gogh and Picasso. The Cotton Fields reveals the peak of his technical development with the use of the pointillism painting technique.

In 1950 and 1960, then influenced by other artists with whom he had come into contact, da Silva created works of a religious nature which revealed a strong dramatic character, while the waters series which continued up until the 1980s have a rich poetic character. Two works clearly reveal this identity: Casa com bois na chuva (House with cattle in the rain) (1953) and Igreja na chuva (Church in the rain) (1982).

In the 1970s, experiencing his chromatic explosion, the artist created a series of works depicting Rio de Janeiro including the Corcovado (1976), Guanabara Rio (1979) and Rio-Niterói Bridge (1992).